I spent Summer of 2017 with my colleague Marcelle Cohen living in and studying the conflict and peace process in Colombia. Our objective was to explore how political discourse as cultural practice creates entrenched ideologies and contentious politics there, and how those discourses relate to other populist movements happening around the world. From a methodological perspective, I’m interested to see how we can use interview data in tandem with computational text analysis and quantitative network methods. We performed interviews with politicians and diplomats, attended political rallies in Bogota and more rural communities, and made connections with some local peace organizations and universities. Our interviews will allow us to give agency to the political elite and understand discourse at a point of production as it is embedded in a political institution. Ultimately I had a great experience that allowed me to test the lenses of cultural and political theory, learn about qualitative methods, and dive deeper into the political culture in Colombia.

I took this photo after the last disarmament event at a FARC camp in rural Colombia. The after-event scne felt like a foreshadowing of post-accords politics.

This article is more about my meta-impressions – see my presentation Political Culture in Colombia for some depth.

This project started about halfway through our first year as soc grad students when we were talking about the deep underlying moral and emotional culture of politics that divide people in the US. Marcelle impressed upon me that a similar thing was happening in Colombia: in a 2016 popular referendum the public voted “no” to set of peace accords that would end the 50 year war between the FARC and the Colombian government. She had spent the last summer there meeting people and learning more about the process, and she planned to go there summer 2017 to interview people after the referendum. This was the type of research I’d always wanted to do – meeting and listening to real people embedded in this political culture that had the potential to change the country for generations to come. I decided to join her on the trip; we submitted the IRB proposal, applied for funding, and took off for Colombia!

Me with university professor Ginneth Esmeralda Narváez Jaimes and two of her students at Universidad de Santo Tomas in Bogota. They invited me to an English-speaking forum about the peace process at the university. 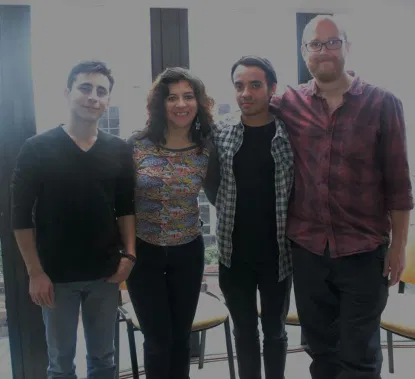 The trip itself was an awesome experience. Not only did I learn about the conflict and peace process there, but through attendance of events and exploration of the city I developed a sense of the political culture and how it enters into other aspects of life. The qualitative research was a lot more difficult than I expected – I relied upon my colleague Marcelle much more than anticipated. In addition, I’m not fluent in Spanish so networking and making friends was more challenging than imagined. That said, I still managed to meet many contacts that I still talk to today. It’s tricky being a non-Colombian studying Colombia; on one hand, we got access to politicians and diplomats that might have otherwise been impossible, but on the other hand the last thing we want to do is tell other people about their culture. People would ask our opinions, and I would always preface by noting that mine is the perspective of an outsider. Still, they listened to what we had to say and gave their opinions on what was happening there. These interactions were invaluable for studying the lived experiences of Colombians.

We met ex-president Uribe himself. The woman on the left had traveled three hours through the country to see this event. She had to leave one hour into the event because it started late. 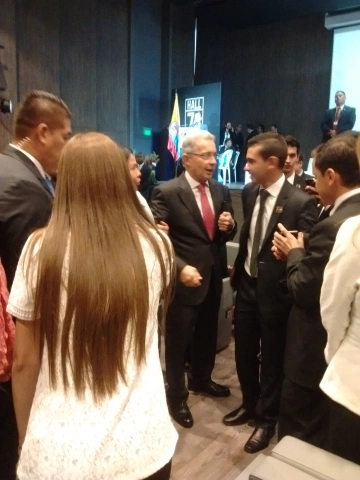 My approach also seemed to be much more theoretical and less Marxist than most researchers studying Colombia, particularly those from political science. That first year in Sociology I was interested in practice theories and the debates between Swidler and Vaisey further laid out by Lizardo. Studying politics in Colombia using only formal theories of culture turned out to be difficult, so I’m doing some theoretical development that focuses on discourse as practice. Thus, the interviews become an demonstration of practice itself. I argue that identifying larger themes and styles of discourse reveal the kinds of “strategies for action” that Swidler pointed to – abstract discursive frameworks which politicians weave in and out of to form coherent and consistent arguments that will identify them with the party while also distinguishing themselves for individual attainment.

Bogota from a tall mountain overlooking the city.

A picture of me outside the state and senate buildings where we did some of the interviews. 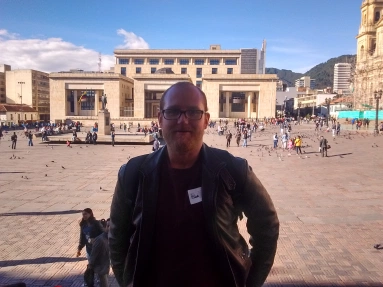 I received an Innovation grant from my institutional IGERT network science program to combine interview methods with computational text analysis and quantitative network methods. While I’m getting rather tired of studies using Twitter, I think it’s a particularly useful platform for studying politicians in Colombia: ex-president Uribe of the Centro Democratico party has Tweeted over 65 thousand times in the last six years alone. Most party members have Twitter accounts with nearly that many tweets, and so I can study relationships between them at the level of discourse. I plan to use Topic Modeling with some of the Semantic Analysis methods I’m developing to further explore how political propaganda becomes “common sense” to party followers. I’d also like to integrate some of the quantitative survey methods like Relational Class Analysis (or Correlation Class Analysis) that Goldberg, Vaisey, and Boutyline have been developing. This analysis would provide insight that goes beyond the study of party propaganda into cultural configurations that motivate the more general public.

I learned much about culture, politics, morality, and sociological research from this trip. Many questions arose about ethical practices and effective research, and still I have many more questions than answers. As someone who had entered the world of sociology less than a year prior, I was surprised at how challenging but exciting qualitative research can be. I’d only read about the adventures of ethnographers and interviewers in books, so it was amazing to be able to do some of that work myself. I think it also gave me a good opportunity to theorize about Colombian political culture while I lived there. It would be difficult to grasp the full complexity of the context by simply looking at survey data or even texts alone.

Here are some more photos from the trip: 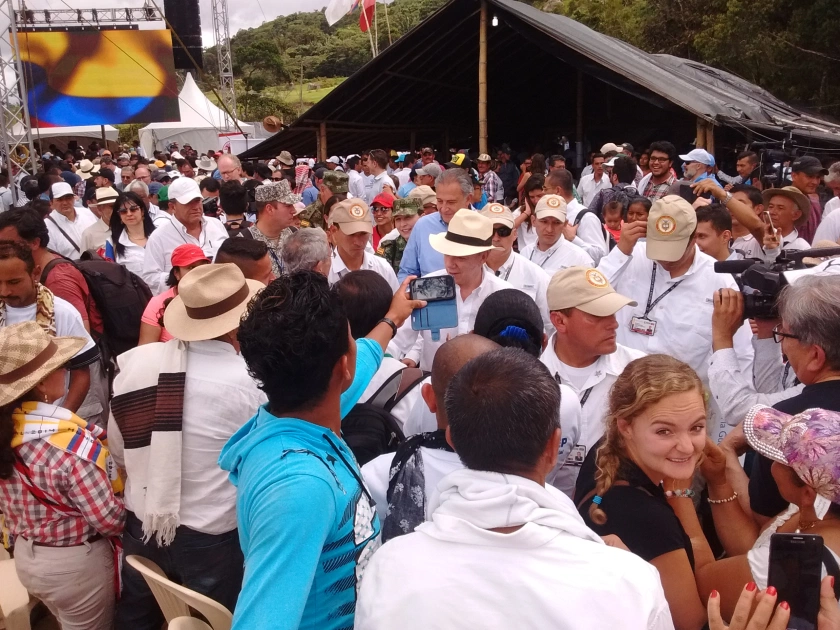 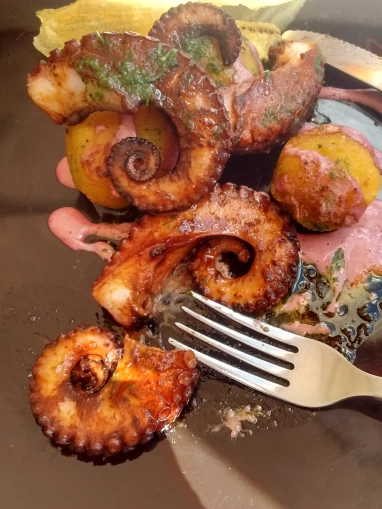 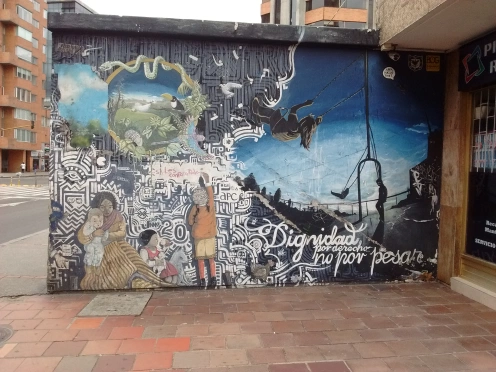 Central square in Bogota with a church and the capital building.